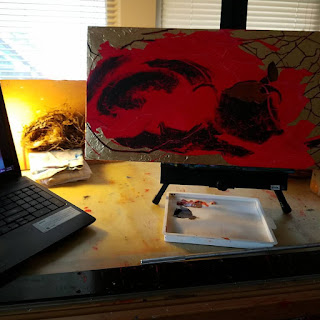 Remember the painting in the ugly stage?

It's done now and sold. This morning I got it wired and varnished and soon it will be going to it's new home which happens to be the same home in NV where the smaller one went. They'll be together! Yeah, I know that's silly and sappy but hey..... don't a piece of ourselves go into every painting? When a collector buys a painting they're buying a piece of us. My heart and soul go into these paintings. Each one is it's own struggle, it's own challenge and it's nurtured along through each stage of development, pushing me and it to be better than the last one. That's the hope anyway. 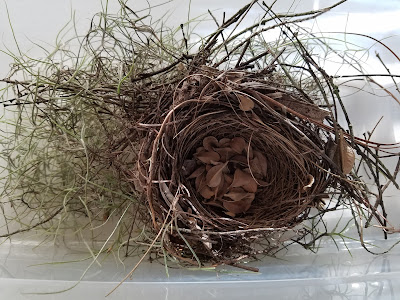 Since last week I've acquired another nest. Isn't it beautiful? This is a cardinal's nest that was in my brother-in-law's yard. Just the day before he brought this to me I was thinking that I'd like to find one with some Spanish moss in it and ta-da! Here it is. I not only love the moss but I love the pile of little leaves inside. This will be another challenge for sure.

Hopefully I can get back to painting tomorrow. Over the weekend I tackled doing taxes- ugh!!!! I'm almost done but not quite there yet and this afternoon I'm teaching a class at the studio.

Until next time..... here's a little thing I found on Facebook this morning. I don't know the name of the creator so if someone out there does, please share with us. It's a little on the naughty side but makes a good point. I've often wondered about critics and their evaluation of paintings. Why do they see what they see compared to what the artist intended? Critics like to get all puffed up with their "artspeak" and sometimes it's nothing more than a simple story. Just ask the artist. 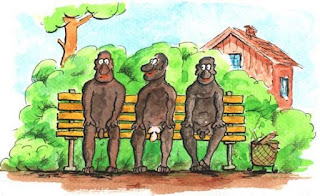 At the National Art Gallery in Dublin, a husband and wife were staring at a portrait that had them completely confused. The painting depicted three black men totally naked, sitting on a bench.
Two of the figures had black penises, but the one in the middle had a pink penis. The curator of the gallery realized that they were having trouble interpreting the painting and offered his personal assessment.
He went on for over half an hour explaining how it depicted the sexual emasculation of African Americans in a predominately white patriarchal society . "In fact", he pointed out, "some serious critics believe that the pink penis also reflects the cultural and sociological oppression experienced by gay men in contemporary society".
After the curator left, an Irishman approached the couple and said, "Would you like to know what the painting is really about?"
"Now why would you claim to be more of an expert than the curator of the gallery", asked the couple?
"Because I am the artist, who painted the picture", he replied, "In fact, there are no African Americans depicted at all.
They're just three Irish coal miners. The guy in the middle went home for lunch"