Was there a January? I don't know. It's just a blur now. I know some amazing stuff happened like having some good sales from my oh so wonderful Signature Gallery. I can't even tell you just how much I love them! Thanks to them, I had to get busy painting some more - oh darn. 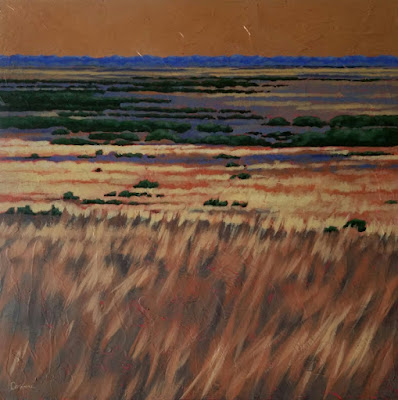 Paynes Prairie
20x20
The locals know this place. Sometimes on trips between Ocala and Gainesville I'll stop and walk out on the dock on 441 and take pictures. When I have more time I'll go into the park and climb the lookout tower for a different view.

Garage Apartment
12x24
Since starting this bird nest series I've been gifted numerous nests from friends. This one came from my neighbors garage. It really is this shape. It was high up in the rafters in a corner and it looked like the bird wanted to fill the entire beam. It included bits of white fuzz that looked like batting and some pieces of blue and pink yarn. 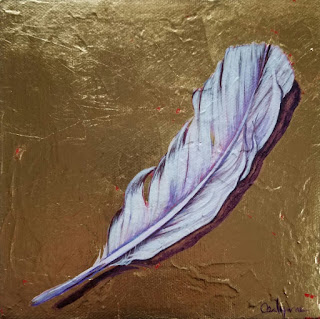 White Feather
6x6
I've also been given lots of feathers so I thought I'd play with those. This is the first one- starting small. I'm not sure yet where I'll be going with these so stay tuned....

So those are 3 of the 10 pieces heading up to the gallery in the next week.

Then.... I was contacted by the Macon Arts Alliance Gallery asking if I would send some work to them for their upcoming show in March. Yay! They specifically asked for nests and florals so.......
These are 2 of the 9 pieces heading that way later this month. And in case you're wondering, no, I did not paint 19 paintings last month. I was busy but I do like to sleep too. Some of the work is inventory I already had here in the studio. 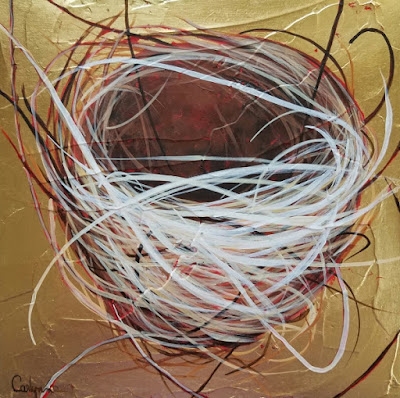 Cubby
8x8
This is a crazy little nest made from horse hair. My friend Jean brought a couple of these in to class one day. She said she can tell which of her horses sacrificed hair for the little bird by the color of the nest. 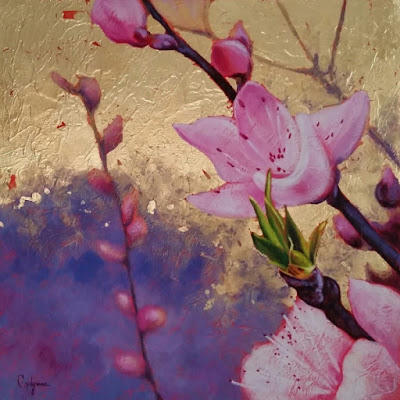 After the Blossom
18x18
This was actually done from a friend's photo. I don't usually work that way but she had some beautiful shots and she gave me permission to use them. I wanted to play with the combo of pink and gold. Gold, anyone surprised? 😁

So there ya have it. That was January. Unfortunately the first week of February kicked my butt. I was sick in bed with a rheumatoid arthritis flare up. Any other artists out there dealing with a chronic condition that likes to interfere with your life? I'd love to hear from you. How do you deal? Anyway, now I'm back to feeling human again and ready to go. It's time to get some work boxed up and out of here and then back to the easel. Next time I'll share the landscape diptych I'm working on. Would you believe it doesn't include gold leaf?