Making something new to play on

Surprise! I know it's weird to see another post so soon after the last one but I just wanted to share a quick look at what I was playing with this week. When I was shopping at Sam Flax a few weeks ago I was admiring the accordion sketchbooks, or what some call concertina sketchbooks, and I was also admiring the price! I didn't want to spend that much on a sketchbook so I decided to make my own. I certainly have enough paper lying around the studio so I didn't have to purchase anything. 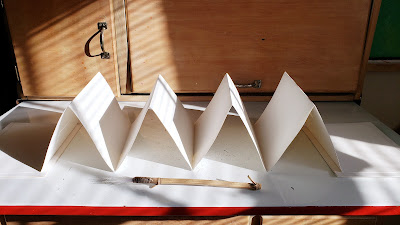 I used a full sheet (22x30) of 140lb Winsor & Newton watercolor paper. I cut two 8" x 30" strips from the sheet. I measured and marked every 6" on the two strips and then folded each one accordion style. Then I attached the two strips together to make one long one and glued the two ends to pieces of mat board that I had cut to 9x7 so the covers would be slightly larger than the pages. After the pieces were assembled I gessoed both sides of the paper and both covers.

I made the sketchbook Monday and yesterday I started playing with it. Here's a bit of video of me working on it. Yep, I know the camera should've been on the other side of the drawing board but the way my studio is currently set up I don't have a lot of options for placement. If I put it on the left side, it would have to be attached to the drawing board and the motion of me working at it would have the camera wiggling all over the place. I don't post a lot to my YouTube channel for that reason and I'm not a video producer. I'm just sharing little clips for folks who want to see a bit of the process. Hopefully I'll get better with time but right now, honestly, all my focus is on the painting process itself. I'd rather be painting than dealing with a tech learning curve. Sometimes, us old schoolers have to be dragged kicking and screaming into the current century. At least I've quit putting two spaces between sentences when I type and I'm even going to learn about NFTs! That's big and it might take a while for my brain to wrap around that concept. LOL
Anyway, have a happy hump day everyone. I hope you're doing something creative.

After our analysis on the most effective roulette sites on-line, the ball lastly landed at BetOnline. Here’s a listing of the top roulette casinos on-line ranked for epic roulette variety, simple earn bonuses, quick payouts, business popularity, and more. All of the recommended casinos right here are|listed below are} respectable sites that maintain players safe. They respect playing guidelines and age restrictions, providing a wonderful real money gaming expertise in a safe environment devoted to players' welfare and 온라인카지노 safety on-line. In phrases of minimizing the home edge, your best guess in roulette would be on a European roulette table providing the En Prison rule, as this reduces the sting to only 1.35%.