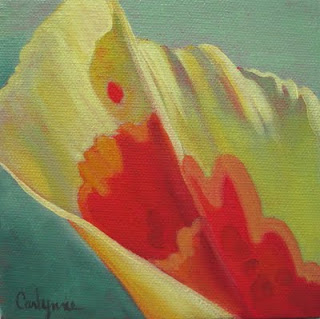 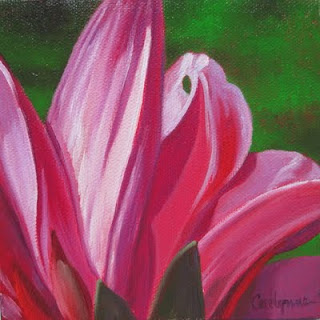 Clematis
5x5
oil on canvas
These are the two little paintings I finished today. The top one I did from a photo I took of the Canna in my yard. The second one is from a photo I took quite a while ago and I don't remember where I took it or what kind of flower it is. I was told today that it looks like Clematis. Since the picture was taken from the backside of the flower I have no idea what the center looks like or even what color it is. So apparently I'd better take better reference shots or at least take notes when I do them so years later when I use the pics for a painting I'm not clueless.
Anyway, it's still fun to play with cropping on florals and focus more on the abstract quality of the composition. I'll be adding these to the Etsy shop soon.
Posted by Carlynne Hershberger, CPSA at August 29, 2011 2 comments:

I painted it again? 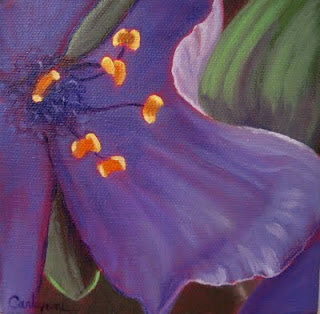 Spiderwort
5x5
oil on canvas
These are a couple of the pieces I've been able to finish in the last week. The flower above is the seventh one I've done in the little floral oil group. It's now available in the Etsy shop along with most of the others. 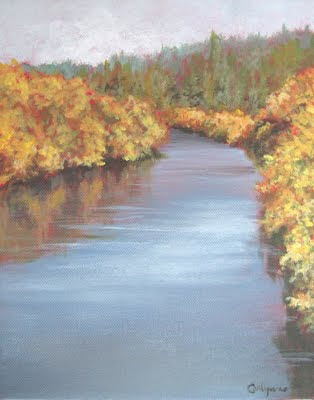 Trinity River
10x8
acrylic on canvas
I should actually call this little landscape Trinity River Again? I can't even count how many times I've painted this scene. I just don't get tired of it. I'm not usually one to paint the same thing over and over again but for some reason this particular landscape just won't leave me alone. I figure if I can't stop painting it then I'll make some students paint it too. I'm going to use this painting for the workshop project when we do our painting party at the end of Oct. I'll post the details about it on the H & H Studios blog soon so check there to keep updated.
Posted by Carlynne Hershberger, CPSA at August 23, 2011 2 comments: 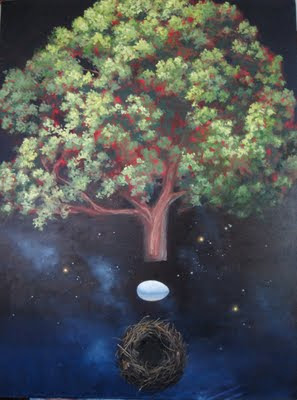 You saw this one in an earlier post - I just had the tree blocked in. This was my focus for most of the weekend. I really felt the need to get back to work on the oil painting and something that has a lot of personal meaning for me. Once I figured out how I wanted to proceed I jumped back in. I'm not finished with the tree yet and I still might add some more stars in the area surrounding the egg and nest. When I'm done I'll shoot a better photo (one that doesn't include bands of light coming in from the blinds) Overall I'm happy with the progress.  Comments?

A kick in the ass

I read a blog post today that really resonated with me. I don't know the author personally but we're Facebook friends. He's an excellent artist, holds himself to quite a high standard and it shows in his work. His post was about just that - standards. In it he mentions Gordon Ramsay of Hell's Kitchen fame. I haven't really been a fan of Ramsay's because I just couldn't take all the yelling and screaming he was doing at the people on the show. I don't know how much of that was really him or just for ratings - maybe it's both and the producers really know what they're doing.

"Ramsay is a rare example of an individual who can bring out the passion and the very best in someone. He's like a drill sergeant, a mentor, your high school principal and you're best friend all in one. The guy is a genius. What I appreciate more than anything is his strict adherence to standards."


Ok, to be fair I haven't watched much of Ramsay's shows but if he's all that maybe I should give him a bit more time and give his show another watch. I do have to say that since I have a son in the restaurant biz and people have suggested that he try to get on to that show, the thought just makes me cringe. It's just the momma bear in me wanting to protect my cub from such treatment (although my son can certainly take care of himself).

So anyway, back to the point.... the post was about standards in art.

"Hold your art to these same standards. Gordon doesn't sugar coat it. When he sees laziness and low self-esteem in people, he kicks them square in the arse and gets them to believe in themselves. Summon your inner Gordon, dammit, and whip yourself into the person you should be! Great people are not created, they are made. Stop acting like a pathetic version of yourself."


There it is.... the line that got me - "Stop acting like a pathetic version of yourself." It's so easy to fall into that. It's so easy to fall into a pattern of our work being good enough to just pass muster. When our students do it Kelli and I fight it and try to get them to push beyond that point. When we teach we work at getting them to realize their potential. We get them to work harder. We're especially hard on the people who have the most to give. They may not always like it. Many times we hear - am I done yet? Many times the answer is no. We work at getting them to move beyond the point where they feel they can stop and get away with it. Good enough just isn't good enough.

Then I have to go to the studio and face my own work. This is where I look at what I do and wonder - am I doing all I can do? Am I taking my own advice when I walk into the studio? Can I go that extra inch or mile? What can I do to make my work better? We can all step back and take a look at what we're doing. Evaluate. See where we can improve. Take the steps to make that happen. Stop with the excuses. Own it and make it.

Sometimes we all need a kick in the ass.