Silent Voices is my story and the story of millions of women. It is the story of birth, loss, longing, power, powerlessness, surrender, grief, family and meaning. It represents the spiritual and physical connection that women have with their children and what happens when that connection is lost at birth. It's about children losing their identities and their histories, their families and their truth. It's a story lived and seen through the eyes of a mother who lost a child and a person who lost a paternal history. The stories of original mothers and adoptees are seldom heard. These paintings bring a voice to some of those people. Each painting represents one moment in time, one aspect of living with adoption. 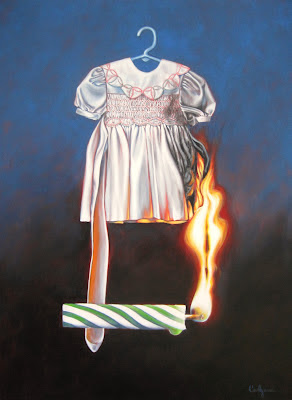 Is it meant to be.....
that a baby cries for the only voice she knows?
that a mother grieves for a lifetime?
that sisters can't share secrets?
that brothers can't protect?
that a child loses trust?
that what's primal doesn't matter?
that the wound is ignored?
that birthdays become burdens?
that her childhood is stolen from her mother?
that the state says no to who she is?
that lies become ordinary?
that a baby can't have the milk made for her?
that the mother is stolen from the child?
that a child lives life wondering?
that a mother lives life searching?
that strangers hold while family sits empty?
that children become chattel?
that money matters more? 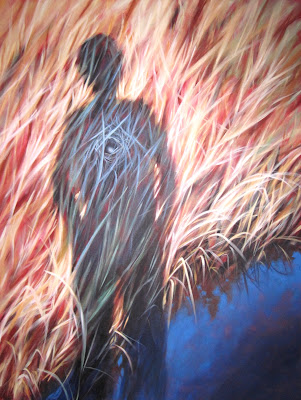 Standing at the edge,
treading lightly,
casting what's left of myself.
Who I was is gone.
This is what remains.

Bought and sold,
before and after.
Thoughts move from light into shadow.

One event, one moment,
became 2 lifetimes changed.
Holding thoughts of her,
protected in the small dark place,
time moves in and out of the light.

With her,
in the sun,
who would we have been? 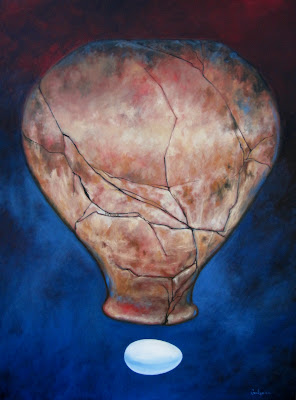 Young and supple,
keeper of the precious.
Lifeblood pulses, cells are shared.
Body to body the history flows.

Your role ends here,
one's beginning is another's demise.
The cargo delivered to the waiting
who think the cure has arrived.

Cracked and worn,
the vessel waits
to be unearthed,
discovered by the one it bore. 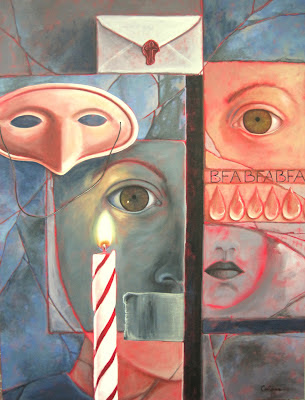 
Fractured and broken in shades of grey.
The stories are sealed, the secrets not lies.
A life hidden and changed,
kept in tidy boxes so as not to disturb
the shining image of others.

Black on red, the letters controlled.
The signs were there, sending two lives down different roads.
One life unknown, the other unseen.

Imagination and grief hold hands under the mask
until the friction chafes and burns
with the once a year flame.
The lids break open, the cracks widen.
The flames get higher, the ash deepens.

Take cover
Let the fire heal and the wounds return
to the soothing shadows. 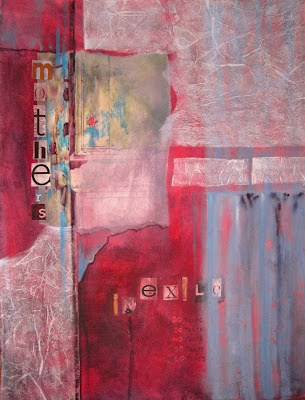 Hidden in shame lies are told
about us, by us.
Gratitude for sacrifice slams the door.
Our motherhoods removed
they think, they wish.
Behind the door our hearts beat, our arms empty, we wait.
Our children grow, we search and find.
Sometimes good, sometimes sad.
but still we sit......

Huddled together, a group outside.
The mainstream flows, comforted in their easy belief.
We push against the current hoping to get through.
Again the door slams shut.
Again we lean a little harder.
A small wave of light escapes from beneath.
Our stories are read.
Replies come fast and furious to put us in our place.
"just because you had a bad experience" they said.

Behind the door the words get larger.
Through mothers in exile silent voices heard. 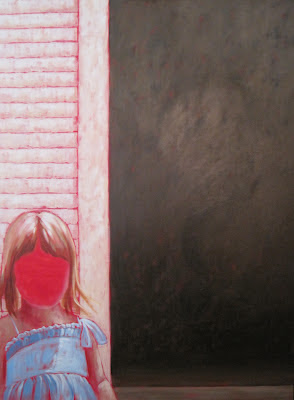 Mothers wait. The faces are blank.
Year after year searching the eyes on the street wondering if her color matches,
her size matches, her voice matches the long ago cry from delivery.
There are no eyes.
Every dream ends with emptiness.

She skips through the chambers of her mother's heart into the arms of another,
unaware of her journey.
She doesn't know her face was erased for another who longs for her.
She doesn't know that under the same sky another waits and wonders and worries.

Another, as hard as she tries, can't conjure the features that they share.
She tries to imagine the small voice calling momma. 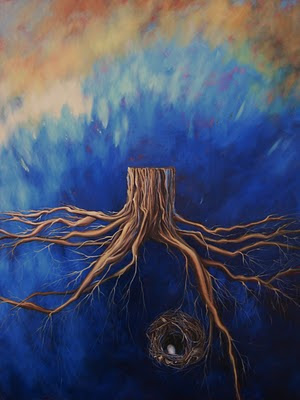 A shadow at the back screen door, silhouetted by 6 bright bulbs of the chandelier,
looks out wondering why?
Hiding in the dark of midnight waiting for the shadow to retreat so the sounds of sadness don't have to be swallowed whole.

The graft is still tied to the stranger branch, being held back but yearning for the original, tongue tied, arms released but still struggling against invisible restraints.
The roots are still and waiting, wishing, sending thoughts on the breeze heading north.
Keeping it light, texting a smile, another week goes by. 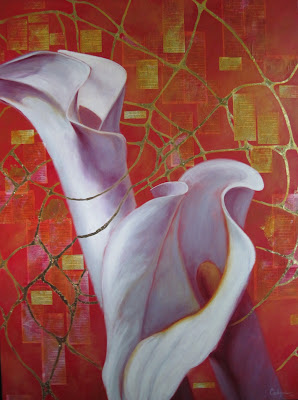 My forearms brace, I rest my temple against the cool tiles.
The memories cascade as hot water runs down my back.

Off white, ecru, eggshell, ivory, every shade but lily. Lily was reserved for the good.
The girls who stayed closed.
Standing firm and bright was just a facade.
The golden strands of faith tarnished.

I believed they would hold me up.
I believed the generation before me.
As the incense burned and the wafer melted I trusted.
Verses droned on and beads clicked.

Bless me father, I am not worthy.
The golden strands wrapped and smothered til the breath was gone along with my child.
The water runs cold.