How I'd like the new year to be -  Glorious. In Harmony. That's how I'm setting my intention. By being in my studio this week; painting, feeling connected to nature, to creativity, to feeling, to joy. 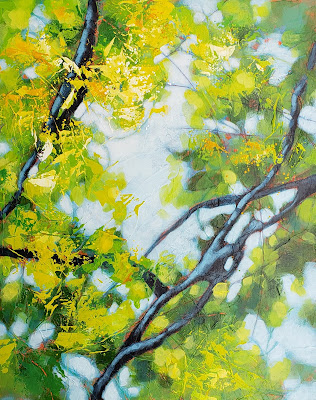 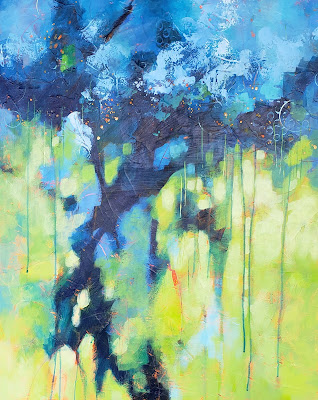 In Harmony
30x20
Letting myself paint this week without the feeling of urgency, the need to sell, the pressure of work. I just wanted to feel the joy of painting intuitively and not care about anything else. Below are a few close ups of the next one on the easel. Bold color everywhere! I love the compositions of these little snippets. They might be the inspiration for some smaller canvases in the future. I'll share the finished painting in the next post. 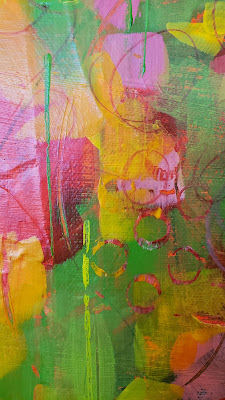 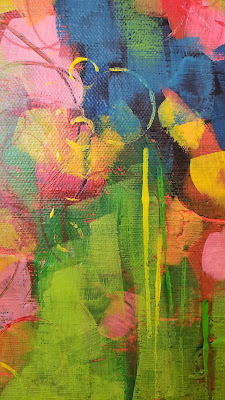 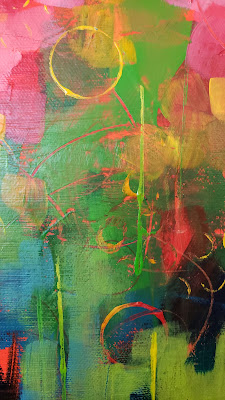 So with joyful color, I wish you a very Happy New Year!! I wish for all of us to have love, creativity, and prosperity in 2022.

Posted by Carlynne Hershberger, CPSA at December 31, 2021 No comments:

What happened to this month?! Was it really Dec 1st last time I posted? So, what I did this month..... rememeber the wasps I was battling? They won another battle but I won the war. 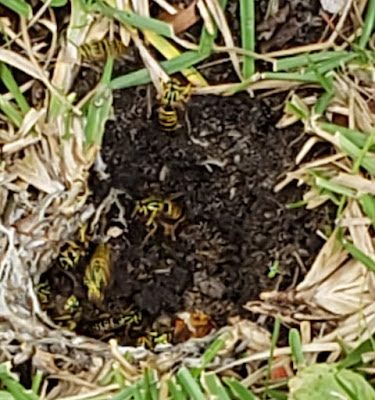 I managed to snap a pic of these nasties before things got really ugly.
After pouring the powder and moving the birdbath over the hole, I thought they would be trapped but it didn't work. I wanted to do something that wouldn't harm the camellias that are right next to the nest so I was looking online and saw that a glass bowl placed over the opening would trap them. You have to do things like that early in the morning while the temp is cool and they're down inside the nest.
I put my heavy robe on and headed out. With the glass bowl in my left hand, I grabbed the bird bath with my right and pulled it out of the way. Well, they were waiting for me. Before I could put the bowl over the opening, a huge clump of them came zooming out. I dropped the bowl, it broke against the bird bath, I ran while they chased and stung me. Luckily only 3 of them got me - one on the earlobe and 2 on the leg. I saw them crawling all over the robe so I threw it off, left it in the yard and ran inside where I smacked several more off my pj's, stomped on them and had to get the bug spray to kill the one buzzing in the kitchen.
Before all this happened, I wanted to do things organically, no poison. My husband suggested gasoline. Of course I said no. I can tell you that after the pain of being stung multiple times in that very traumatic incident, I told him he could throw a molotov cocktail down there for all I cared. If I lose a few trees, so be it. It didn't get that dramatic but I did call the pest control guys. It took them 4 trips to the house but the nasties are finally gone. Lesson learned. Do not bother the yellow jackets. Call a professional.
And yes, art happened too.... 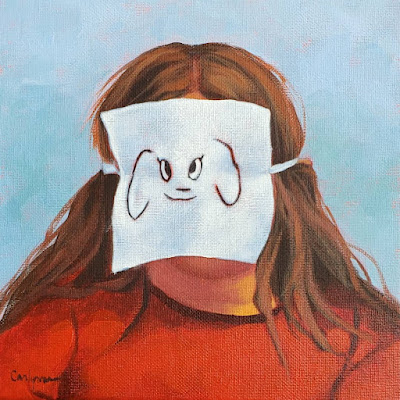 Remember the painting of my granddaughter from the previous post? Here's her sister with her mask. Fun! 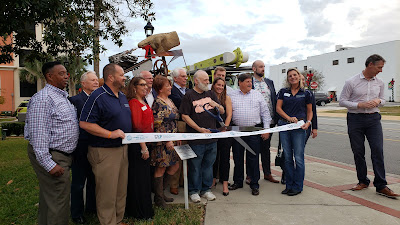 My husband Mark is also an artist and he did a special outdoor sculpture project in collaboration with IHMC - Institute for Human and Machine Cognition and OEU - Ocala Electric Utility.  Look above everyone's heads and you can see a bit of it - the human hand and the robot hand. It's a steam punky kinetic sculpture so the robot hand moves up to meet the human hand. Here's hubby cutting the ribbon at the unveiling. The last weekend of working on this project in our yard was also the same weekend of the wasps. After I stirred them up I was terrified they would go after him and the others working on the sculpture. Thankfully they didn't bother the guys but they stayed mad all day, swirling in a huge cloud over the opening of their nest. Nerve wracking!! 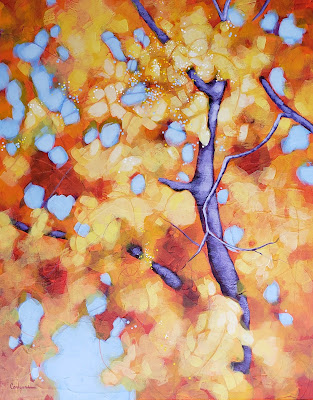 Second Spring
20x16
I painted a couple of new pieces too. This one is part of the group from this post, lots of hot color. 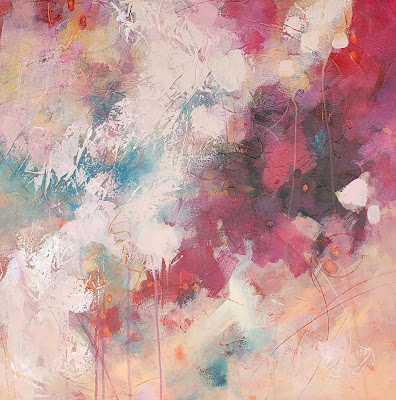 And then I had to play with texture and drips. I was still feeling the warm colors but went with more red and pink. Doing these non-representational, textured pieces are a break for me. They help me loosen up and keep things fun and exciting. I can't seem to paint the same thing over and over again. I need change.
The highlight of the month was going to the Appleton Museum to see the Mucha exhibition. I went with my friend Kelli who studied printmaking in college. She was able to explain in detail about the process that Mucha used for his posters. I had no idea they were so large and the process so tedious! The exhibit will be at the museum until January 9th. If you can make it, it's a must see. 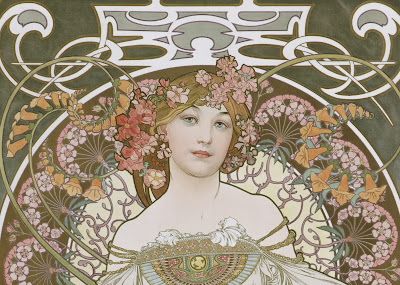 The bonus at the Appleton was the Christmas display. My youngest daughter was a ballerina in her dance school days so I had to get a photo of this display because of the legs and feet on the table. The display is so whimsical and fun, a perfect way to say Merry Christmas! 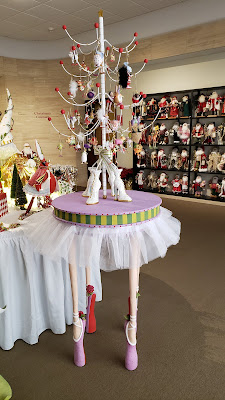 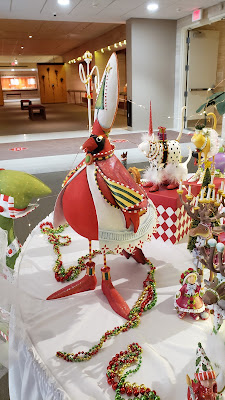 I hope you all have a wonderful week, a very Merry Christmas, a Happy Holiday however you celebrate. Spend time with your loved ones, eat good food, play and be happy.

What's inspiring to you?

So yesterday I was out in my yard battling an underground wasp nest. It's really a matter of pouring some powder into the hole and running the other direction. Then I realized that I forgot the second step which was placing something heavy over the hole in the ground. This morning I repeated the process and remembered the second step. While standing there enjoying my yard without dodging flying stingers, I spotted the first camellias of the season. I have to take pictures. I may not paint them for years but I can't let this year go by without at least taking a few shots. They're just so ruffly!! 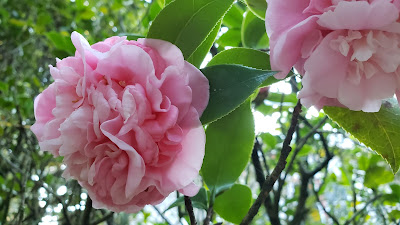 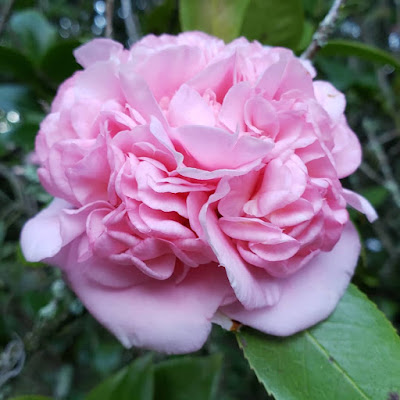 These are the early bloomers. Some other varieties will bloom later in the winter like the one I painted below. I don't remember the names of the different varieties but I enjoy the different shapes, petal structures and colors. For this painting I used gold leaf in the background and glazed a bit of green over the gold. This flower isn't quite as ruffly as the earlier ones but I love the way the stamen surround the center petals.

January
20x10
Available here.
And then there's another kind of inspiration.... 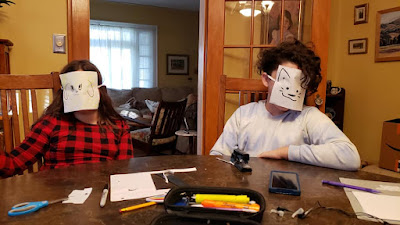 These girls inspire me all the time. My granddaughters were out in the yard (no, not anywhere near the wasp nest) doing a little role playing so they decided to come in and make masks for their characters. I loved the image so much I had to do something... 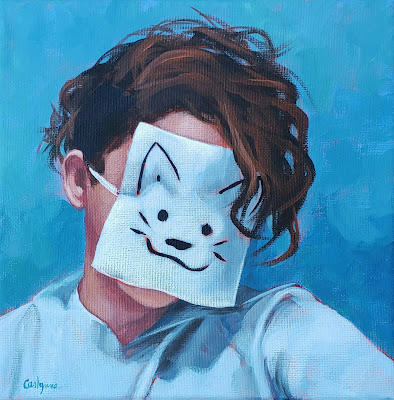 This was a lot of fun to paint! It's small, only 8x8, so it was fairly quick to do. I know I'll be painting at least one more of these and who knows, there may be more. We'll see. 👀
Posted by Carlynne Hershberger, CPSA at December 01, 2021 No comments: